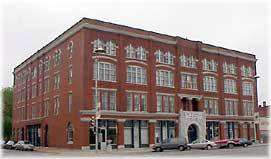 The Hotel Stilwell was built in 1880 and placed on the State and National Registers of Historic Places in 1980. Guests of the historic Hotel Stilwell have included William Jennings Gryan, Eugene Debs, Susan B. Anthony, and Theodore Roosevelt. In addition to being a hotel, the building also served as the Kansas State Capital in 1919. It was restored in 1997 by the Stilwell Heritage & Educational Foundation in partnership with MetroPlains Development, Inc.

The architectural design incorporates a graceful procession from a grand stone entry flanked by rounded brick columns on the first floor. The second and third floors are detailed by a dentillated cornice and wide-bay windows. Smaller arched windows on the fourth floor are topped by pressed brick masonry and a short parapet. Over the entry arch is the balcony where Susan B. Anthony once spoke. A carved limestone Griffin guards the balcony.

Historic features that have been restored include a circular leaded skylight, generous ornate plaster work and stained glass windows. The upper floors have been converted to 44 full-sized apartments
for senior citizens.

The first floor historic common areas are open to the public week days from 9-5 and on weekends by appointment. The large Timmons Ballroom is available to rent for special occasions.


Come visit us in Pittsburg, Kansas

Things to do Historic Buildings near Pittsburg, KS

The Pittsburg Memorial Auditorium and Convention Center was dedicated on November 20th, 1925 as a Shrine Mosque. The outer st...