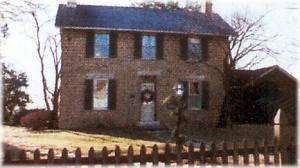 The bridge is a 216-ft. reinforced concrete Rainbow Arch bridge designed by James Marsh. It was completed in 1923 on old piers dating from the 1890s. Closed to vehicular traffic, it has been incorporated into the Soden'

The 1904 Carnegie Library Building, listed on the National Register of Historic Places, housed the Lyon County Historical Museum for 36 years from 1980 to 2016

This house, a National Historic Register Landmark, was rented by William Allen White in 1899 and purchased by him in 1901. It was his home for 45

Emporia Center for the Arts

The Emporia Arts Council offices are in a building that was once a car dealership, and has been renovated with volunteer labor. The building also houses exhibits, classes, programs, theatre performances, and premiere performances by renowned artists.