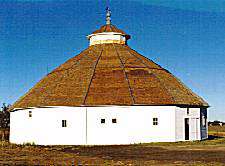 In 1912 Henry W. Fromme, a German immigrant, hired William "Pat" Campbell, a local carpenter, to build a large round barn to house 28 draft horses and a box stall for the registered Percheron stallion which he imported from France. Round barns were promoted as being more wind resistant, efficient use of space, and took less lumber to constuct the same volume of space. The estimated cost was $8,000, which is several thousand dollars higher than that of other barns of the time.

Soon after construction the tractor replaced the horse as the farm power source and the barn was obsolete. It was later used for hay storage. In the 1980's Phyllis Birney received the barn and one acre of land from her husband Lawrence as a 15th wedding anniversary gift. Through her efforts, in 1987 the barn became listed as the Fromme-Birney "Round" Barn on the National Register of Historic Places for its architectural significance.

Phyllis Birney gave the barn to the Kiowa County Historical Society in 1993 and it has since been restored to original exterior condition with the help of many individual donors and a Heritage Trust Fund Grant from the Kansas State Historic Preservation Office. The weathervane is a work of art! Although you cannot see the detail from the ground, each of the 2000 metal roof hip shingles were imprinted with the same floral pattern as the originals. The haymow and interior was restored in memory of Moritz Fromme, son of the original owner.

Not actually round, but sixteen sided, the barn stands 50 ft tall and 70 ft in diameter. It is covered with a double pitch, domical roof that is topped with a sixteen sided cupola with an elaborate 6 1/2 foot weathervane. Almost 2,000 pattern imprinted galvanized metal "hip shingles" covered the ridges where the sixteen sides of the roof come together. A sixteen sided granary stands in the center of the barn on the first floor, and measures sixteen feet across. A wagon area measuring thirteen feet wide encircles the granary. Fourteen trapezoidal stalls measuring fourteen feet in length and fourteen feet at their widest part line the exterior wall on the first floor. The two level haymow is covered with tongue in groove pine boards. Original color was white with a green roof. The barn stands out from miles around and served as a landmark for training WWII bomber navigators.

Displays inside include pictures and stories of round barns of the U.S., farm machinery and farm life of 1912, and information on the builders. The winners of a 1917 barn photo contest are displayed. Additional local historical items may be seen at the Museum in Greensburg.

Come visit us in Mullinville, Kansas

In 1912 Henry W. Fromme, a German immigrant, hired William "Pat" Campbell, a local carpenter, to build a large round barn to house 28

We currently do not have any events for Mullinville, Kansas in our database. If you know of events taking place, please add the event
.

Things to do Historic Buildings near Mullinville, KS