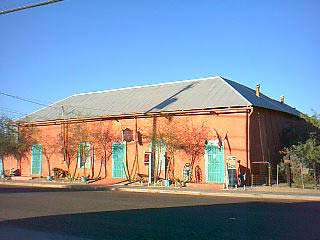 In 1888, Florence staged her most famous gunfight between ex-sheriff, Pete Gabriel and his former deputy, Joe Phy. The shooting started in the Tunnel Saloon and ended in the middle of Main Street. Gabriel survived; Phy died a few hours later. Also surviving the showdown was a 6 x 4 foot mirror framed in white pine, pierced by a stray bullet. The mirror made its way from the Tunnel Saloon to Dick's Pool Hall and finally to this home listed on the National Register of Historic Places,where you will see it today.

Jesus Martinez, a local farmer from New Mexico, built a portion of this house in the mid 1870s. In 1880, he sold a half interest in the parcel to Clemente Romo, an adobe mason, for $300. An 1882 survey indicated the building was completed to its present size and shape. One year later, Romo owned the entire property.

Prior to 1915, the building was divided into three units and contained a store, residence, and a meat market. After 1915, it was converted into a single residence. The current owner has carefully restored the property.

Things to do Historic Homes near Florence, AZ