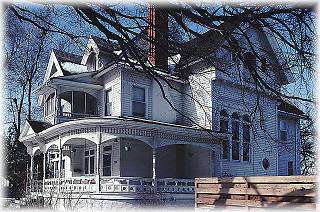 The John Barnd House, located in Kearney, is a large two-and-one-half-story frame dwelling built about 1892, and a good example of the Queen Anne style. Barnd came to Kearney in 1874, established a law practice, and later was elected Buffalo County judge for two terms. In 1888 Barnd established the Mutual Loan and Investment Company of Kearney; the following year he became co-owner of the Commercial and Savings Bank.