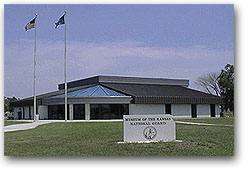 The Heartland Orthodox Christian Museum presents the art, history and traditions of the diverse Orthodox communities in America. Discover the region'

The French-Norman style house which was built by Frank P. MacLennan in 1928, is home to the governor of Kansas. It is the focal point of a 200-acre estate overlooking the Kansas river. Listed on the National Register of Historic Places, the estate features several ponds and hiking trails.