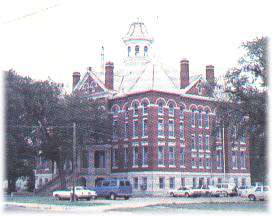 The Kingman County Courthouse is also on the National Register and is worth a look. The stairs are massive, like many of the old courthouses, but these are really different. The railings are made of one piece of limestone that's probably close to 20 feet long and at least 12 to 18 inches square. The columns are also massive and just a little different, but fit well with this 1907 building that is a good example of courthouses from the turn of the century.

Things to do Historic Courthouses near Kingman, KS