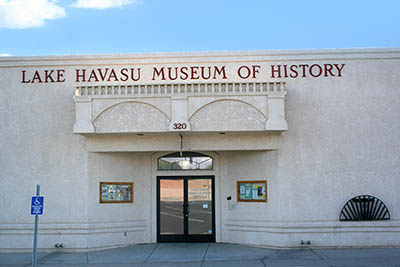 Step back in time with exhibits about the London Bridge, Steamboats, Parker Dam, Mining, and the Chemehuevi Exhibit with PowerPoint and video presentations that
inform and entertain. The museum also has a collection of local newspapers, dating back to the first issue.

Things to do Museums near Lake Havasu City, AZ

The temporary building (donated by the Beaver family) is being used by the Historical Soceity to its capacity. There are many...

The original abode stage station was built in 1866 by Charles Tyson at its present location. It was an important way station ...

There are two new exhibits: One is an exhibit of the Rose Massacre which took place within 200 yards of where Fort Mojave wa...

The Colorado River Indian Reservation is unique in the sense that it is occupied by four (4) distinct tribal groups: Mohave, ...

A regional museum of the Arizona Historical Society, Century House is one of Yuma's oldest and most historic buildings. Once ...