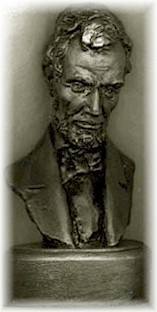 As the county seat, it features the beautiful courthouse built in 1900 which is now listed in the National Register of Historic Sites. Located in the Heart of Post Rock country, limestone buildings in downtown Lincoln are beautiful representations of the use of the unique limestone layers that were discovered by early pioneers as being very useful for building materials in an area of very few trees.

In February, Lincoln becomes the Land of Lincoln Look-A-Likes during the annual Lincoln Reenactment Day, and the fun continues again on Labor Day for the Post Rock Festival.

This dragon sculpture is one of many Creature Creations built by J.R. Dickerman viewable in his "Open Range Zoo"

The Marshall-Yohe House is a Victorian mansion with original furnishings including hand-painted dolls and china. Forty-five minute guided tours are available.

The Cummins Block Building with ornate limestone and arched windows was built in 1881 in Lincoln, Kansas and is listed on the National Register of Historic Places. It stands across from the county courthouse.

The Lincoln County Courthouse is a limestone monument completed in 1900, and listed on the National Register of Historic Places. Most of the facility exists as it was originally hand crafted, and it continues as the administrative and judicial seat of county government.

This limestone house, home to early pioneers Timothy and Bridget Kyne, was built in 1885 by Timothy. Among the featured pieces are a pie safe and table that were also built by Timothy. Two additions provide more display space, and the one-room Topsy School is also in the museum complex.

Things to do near Lincoln, KS