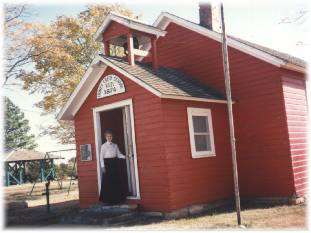 This unique and original schoolhouse, built in 1871, has been completely restored to 19th century style. The Living Library Museum features Old State Printer Books, Lorraine Wooster Editions, and other historic education materials. The school is authentic with such details as a pot-belly stove and dipper and a school bell.

MCGUFFEY readers set the standard in reading and literature.

The "POT BELLY" stove stood in the center surrounded by a metal jacket to act as a circulator and to protect those sitting nearest.

Very little school time was used to teach multiplication tables. Children sung them to each other out in the yard to the tune of "Yankee Doodle". States and capitals and their locations were sung to the tune of "Old Aunt Rody".

This school is listed on the State and National Registers of Historical Places.

Things to do Historic Schoolhouses near Beloit, KS