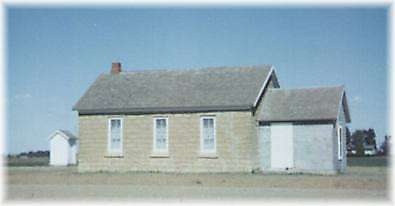 George Ficken Jr. donated land one and one-half miles west of Bison for a German Methodist Episcopal Church and school. Construction began in 1878 with hand-hewn native stone donated by members of the church. It was the first German speaking Methodist Church in Rush County. Rev. C.G. Fritsche, the first resident pastor, cut a lone star on the east gable of the building in reverence to The Holy Land and its Lone Star, Our Lord, Jesus Christ.

Lone Star was used as a church and school until the congregation built a new church one mile north in 1890. The building was sold to school district 34 (later 64) and classes were held at Lone Star School until 1947 when the district merged with Bison.

The schoolhouse has since been used as a clubhouse by the Sunshine Extension Homemakers Unit of Bison. Former students and members of the Bison Men?s Club donate time and money to help with maintenance and repairs. Currently furnishings and memorabilia are being collected in an effort to restore the interior of the school to its former appearance as a classroom.


Hours: Open by appointment only.


Come visit us in Bison, Kansas

We currently do not have any events for Bison, Kansas in our database. If you know of events taking place, please add the event
.

Things to do Historic Schoolhouses near Bison, KS