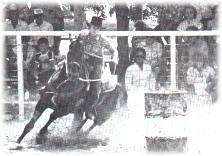 Sunshine and fresh air abound at Loucks Municipal Park, two miles west of Lakin on U.S. HWY 50. Donated by Charles A. and Rhonda Loucks in 1950, Loucks is an 80 acre park that is home for the Kearny County Saddle Club and Rodeo Arena, Kearny County Fairgrounds, and the Louck M Park Golf Course. Golfers, don't pass up the chance to play this excellent 9-hole golf course, referred to as one of the finest municipal courses in Kansas.