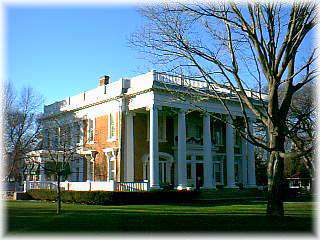 The original portion of the Museum structure, in the Italiante Revival style, was built by Fremont's first mayor, Theron Nye. The Museum is an elegant, two-story brick residence originally constructed in 1874 and slowly modified during the first decade of the twentieth century. In 1901, the home became the residence of Mr. Nye's son, Ray, who remodeled the interior extensively and made several additions utilizing the Colonial Revival style for the exterior renovation. The Georgian Revival renovation was performed by the Milwaukee architectural firm of Ferry and Class and gave the dwelling its present appearance. The property passed to the Midland College Western Theological Seminary in 1921 and was used as classrooms and dormitory until 1967.

The museum is a 25-room mansion which has housed the collection of the Dodge County Historical Society since 1970, and is the official museum for Dodge County. Exhibits and recreated rooms present the 19th and early 20th century Dodge County history in a vital and living setting. Of primary interest are the numerous mantels, the richly-carved paneling of oak and mahogany, the art glass windows and the exceptional tile work of the master bath.

The reception room includes an organ that was originally used at an early Fremont church. A square grand piano and Louis XVI Revival style furniture adorn the parlor. The main floor library, used extensively by geneologists, houses the histories of Dodge and Washington counties. It also includes Dodge County cemetery records, Fremont city directories and yearbooks for Fremont Senior High School and Midland College and boasts a collection of toys from the 1850s to the 1940s.An 1868 Log house, Victorian garden and gazebo are also located on museum grounds. Books are available for guests to browse through. The Museum is listed on the National Register of Historic Places.

Things to do Museums near Fremont, NE