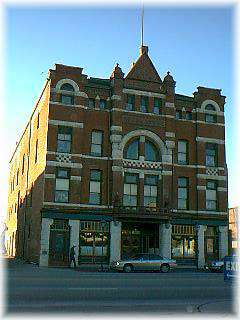 The theater was built by James Wheeler Love in 1888. In 1905 it was purchased by Louis P. Larson and renamed the L. P. Larson Opera House. The three-story brick and stone building is a landmark in the town of Fremont and is one of the largest opera houses still remaining in the United States. The first floor has always been used as a business location with the Opera House above. Seating capacity originally 1,100. The dark red brick with lighter sandstone trim is characteristic of the popular Romanesque Revival style. The Opera House is listed on the National Register of Historic Places.

A local nonprofit corporation, Friends of the Fremont Opera House, was organized to preserve the historic building as a performing arts and community center.

Rented for parties and meetings.

The original building was constructed in 1884 by Charles Osterman and George Tremaine, wholesale produce dealers in Fremont. The Ideal Steam Laundry, Johnson and Company, proprietors, moved into the building in 1894 and doubled the size of the structure in 1911

Things to do Opera Houses near Fremont, NE