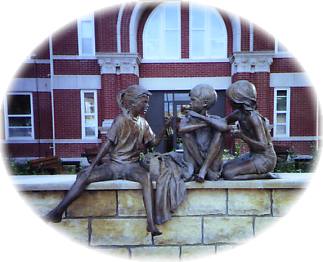 Lyons once was described by an urban development consultant as what residents of large cities yearn for in their search for an improved quality of life; most significantly, a feeling of space that permeates the community. This sense of openness millions of Americans must travel several miles to experience is just a sampling of what makes Lyons uniquely capable of offering a lifestyle in the heartland that is set apart. For those pondering a move, or just an interesting visit, Lyons is worth considering.

The Santa Fe National Historic Trail runs East to West through Rice County along Highway 56, and throughout the years many artifacts left by both the Native Americans and the pioneers have been found along the trail. These artifacts are being preserved and exhibited in the Coronado-Quivira Museum in Lyons.

Lyons was named for Truman J. Lyon, the man who gave 160 acres of land to the new city of Lyons for a town and courthouse site. The "s" was not used originally, but was later adopted for the sake of euphony.

The formation of Lyons actually came about as the resolve of a county seat debate between the then town of Atlanta and Sterling in the southern part of the county. Atlanta thought it would be to their advantage to locate at the exact center of the county which was only about 2 miles away where they could easily relocate their businesses. In fact, materials of the Atlanta Hotel, and Atlanta School were used to build business structures in Lyons. An interesting story recalls how the Atlantans literally "stole" the courthouse at Atlanta to relocate it in Lyons!

Things to do near Lyons, KS

Camping is permitted only in the primitive campground located 1 mile west of the area office....

National Headquarters houses the exclusive collection of decorative art of its membership....