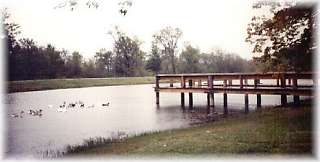 Wagoner is truly blessed with it's parks and wonderful sports complex. The Maple Park Sports complex and park is one of Wagoner's true assets. Sprawled out on almost one square mile, the park features just about everything that a family could want in the way of leisure, entertainment, and recreation. There are 5 softball fields, 2 baseball fields, the High School baseball field, 4 soccer fields, W.L. Odom Football Stadium (Home of the Wagoner Bulldogs), 3/4 mile paved walking trail, Wagoner pond with fishing pier, picnic areas, 4 picnic pavilions, playground, and new in 1999, the Wagoner Water Park. The new water park has two water slides, diving board, large wading area, and shallow children's wading pool. Add extended sun bathing areas and you have a virtual garden of Eden for young and old alike.

Maple Park and the Sports Complex are located at the intersection of North 2nd Street and Story Avenue. From downtown, head East on Cherokee to Story Avenue (past Taco Mayo), take a left (North) and go two blocks to the entrance of the park.

Things to do Recreation near Wagoner, OK

Deer and Small Game - Deer and small game are found in...

Feyodi Park is Cleveland's own park on upper Keystone Lake. It is a beautifully maintained area just a few minutes from t...

Happy Lake is available by reservations only. Camping, fishing, canoeing and nature walks are a few of the activities....