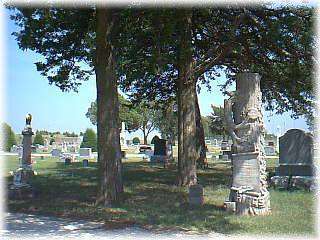 An unusual truncated tree stump is the design of the momument honoring Judge Riggs. The unique monument was made by two Marion artisans, sculpted from Bedford, Indiana limestone. It features a sturdy oak tree about nine feet tall and two feet in diameter. The tree's branches are truncated, a lily blossom in a stone urn rests at the base, and a clinging vine wraps around the tree to the highest branch. Where the branches are truncated, brief epitaphs honor Judge Riggs with messages such as, "An honest judge," "Nature's Nobleman," "A Peacemaker," and "A Poor Man's Friend."

Judge Rueben Riggs arrived in Marion County in 1864. During the time he and his family lived in Marion, he served as county attorney. But his is remembered for his unequaled kindness to his neighbors. According to tradition, Riggs, after returning from a successful hunting trip one November, invited everyone within a two-mile radius to his home for Thanksgiving dinner. After a late evening, he extended invitations for all his guests to return again the next Thanksgiving. Riggs moved to Sedgwick County in 1871, where he became the first Judge of Wichita.

Judge Riggs met a premature death in 1873 when he and his son were caught in a blizzard during a buffalo hunt in Western Kansas. His son lost both feet as a result of the storm. Riggs was buried next to his wife in the cemetery in Marion Centre, later being exhumed to the Marion Cemetery.

Address: East Main, north on Eisenhower, then west on Denver.


Come visit us in Marion, Kansas

The Elgin House apartments was originally a 42 room hotel with a dining room that seated 80 guests, and provided billiard and card rooms. It was built in 1886 of native stone, and is listed on the National Register of Historic Places.

Completed in 1909, the Romanesque revival, native limestone courthouse has a clock tower and stone carvings at entrance. It is listed on the National Register of Historic Places.

The Hill School building is the oldest building in the state of Kansas in continuous educational use. Built in 1873 of native stone, it is listed on the National Historic Register.

To Marion calendar of events

Things to do Cemeteries near Marion, KS