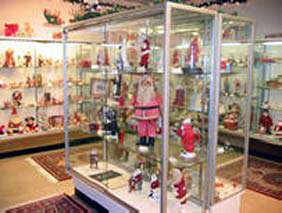 The Mary Elizabeth Hopkins Santa Claus Museum showcases more than 2,000 Santas; old, new, foreign and American, in various media. Someone once told Mary Elizabeth Hopkins that if you have three or more of anything, then you are a collector. Hopkins was certainly that! Today, her legacy includes a museum that houses thousands of representations of the jolly elf. The collection began in 1913 when, at only six months old, Hopkins received her first Santa figurine. It grew to include such notable items as the Duncan Royale series of Santas, Thomas Nast styled artwork from the famous 19th century American cartoonist, and figurines by Coca-Cola's Haddon Sundbloom.

The Yorktown Historical Museum is housed in two historic buildings, both on the National Register of Historic Places. ...

Housed in the restored county jail, c. 1895, the Milam County Historical Museum is complete with cells, shackles, and gallows...