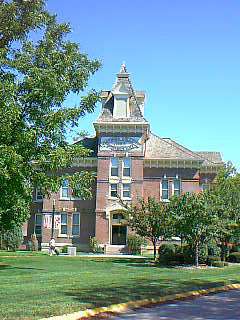 Hastings College opened in September 1882. In April 1883, ground was broken for McCormick Hall, the first building erected on the campus. It was named for reaper inventor, Cyrus McCormick, who made the initial contribution for the building's construction. The hasll was completed and dedicated in October, 1884. The two-story brick structure displays Italianate details.