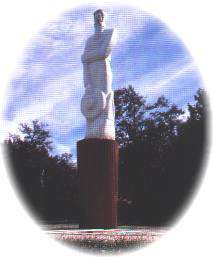 The tallest, sturdiest Mennonite in Kansas stands seventeen feet tall in the Athletic Park. He is the Mennonite Settler Statue built in 1942 out of Kansas limestone. The Mennonite statue was not a Mennonite-initiated project. The statue was financed through contributions of wheat as a joint project of a local Newton community and a WPA (Works Progress Administration) art project.

Things to do Landmarks near Newton, KS