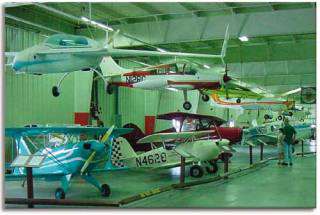 With more than 90 aircraft on display, the Mid-America Air Museum in Liberal, Kansas, is one of the largest aviation museums in the United States. Whether you are interested in general aviation, classic planes, home builts, warbirds, or modern jets, there\'s something to spark your imagination at the museum. Highlights of the collection include the Cessna Airmaster owned by Dwane Wallace, long-time president of Cessna Aircraft and a Beech Model 17 Staggerwing. Military airplanes include a World War II B-25 Mitchell bomber, a Korean War veteran F-80 Shooting Star, and an F-14A Tomcat used during Desert Storm.

Hands-on exhibits demonstrate how and why airplanes fly. Launch a hot air balloon. Unlock the mysteries of lift using a wind tunnel. Study the inner workings of aircraft engines. Operate the control surfaces of an airplane to see how pilots guide their flying machines through the air. All this and much more awaits you at the Mid-America Air Museum.