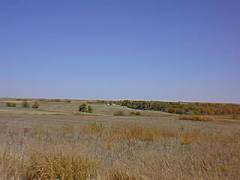 Part of a National Geographic dig in 1985 - 86, the quarry is unique for its specimens of early plant life including bamboo, rice, bullrushes, hackberry, and borages. And right beside them are remains of early day animals. It is said that the site is the richest fossil site in the world. Minium Fossil Quarry is being developed by Fort Hays State University as a satelite of the Sternberg Museum.


Come visit us in Morland, Kansas

State Historic Site In 1982 the State of Kansas purchased approximately twenty-three acres of the original Cottonwood Ranch. Today the Kansas State Historical Society administers the property as one of the state's best preserved historic sites. In the late 1800

The historic Pratt Pony Bridge was made in the early 1900s in Nebraska. It contains no bracing which let horses cross with less reluctance. It now resides in city park and is one of only two pratt bridges remaining.

Beneath an oil derrick on west Highway 24 in Hill City, the Oil Museum tells the story of oil from formations deep in the earth to it's recovery, processing and use. Many pieces of equipment used in the process over the years are on display.

To Morland calendar of events

Things to do Natural Attractions near Morland, KS