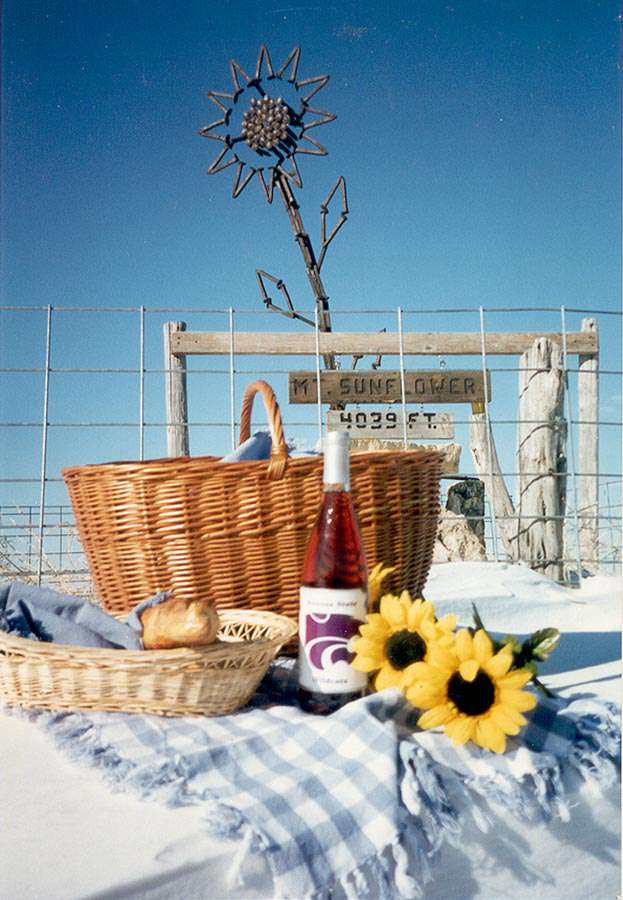 Mt. Sunflower was designated as Kansas highest point in 1961. A United States Geological Survey officially plotted the elevation at 4039 feet. True mountains are called such because of a 2000 foot difference in altitude in a 10-20 mile radius. Since this does not apply to the contour of the land surrounding Mt. Sunflower, it is not considered a true mountain.

To see Western Kansas' most impressive scenery, you have to wait for the end of the day. We, in Western Kansas are privileged to be able to observe the most beautiful sunsets ever seen anywhere. Most every imaginable color is there: the rosy reds, the golden colors of sun ripened wheat, the purple which mountains are supposed to be, and everything in between. If you could touch it, it would feel as soft as velvet, smooth and light.

All the animals must be awed by the sunset as well, because the only sounds one hears are the crickets playing their symphony and the wind sighing softly for the beauty it has once again been allowed to witness. After a short time it is gone, and you stand there wishing it could have continued forever, but knowing that in one day you will once again be able to witness and become enthralled by the sunset.

Address: 3 miles west and 11 miles north of Weskan, then .9 miles west to the cattle crossing gate.
Our Email: wallacecoeda@yahoo.com

Things to do Natural Attractions near Sharon Springs, KS