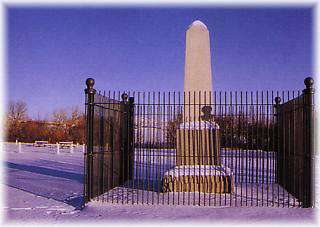 In 1846 Newell Knight, his family, and a company of
Mormons left Nauvoo, Illinois to search out a home in the
Rocky Mountains. Due to hardships, the group could not
go on and they built a fort of log cabins by the Niobrara
River. Due to illness, all died. The Mormon Monument
was built in 1908. Those buried here are: Newell Knight,
Mr. Caval, Lucy Brunson, Ann Boyce, Mr. Rufus Tach,
Mrs. Spicer Crandall, Mrs. Newell Drake, Mrs. Dame
Gardurout Noble and Benjamin F. Mauer--1846-1847.

Things to do Monuments near Niobrara, NE