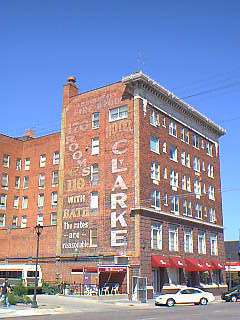 When the Clarke Hotel was dedicated in February 1914, it was hailed
as a triumph of local initiative. It was designed by architect C.W. Way and
built by the John Hamper Company, both of Hastings. Bricks made in Hastings
formed the exterior of the building, and local craftsmen made everything from
the terra cotta trim and manqué awnings to the light fixtures, oak millwork
and mosaic floors. A 1916 addition to the six-story Renaissance Revival style
building expanded its size to 170 "absolutely fireproof" rooms and
included a ballroom with seating for 300. Many notables visited the luxury hotel,
including former President John F. Kennedy. In 1987 the site was added to the
National Register of Historic Places.

Adams County, and Hastings in particular, are "children of the railroads," having been founded and sustained by rail companies between the 1870s and 1960s. Hastings owes is very existence to an intersection of two