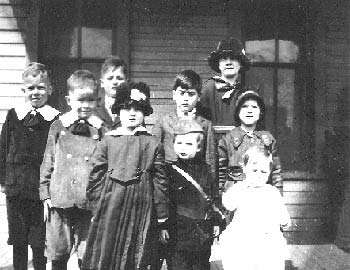 Between 1854 and 1929 over 250,000 orphaned, abandoned, and homeless children were relocated from New York and 'placed out' all across the US. The Orphan Train Movement is one of the largest social reform relocation efforts in our nation's history and the beginning of documented foster care in America. It is believed that one in every 25 Americans is somehow connected to an Orphan Train Rider.

The Museum and Research Center are dedicated to the preservation of the stories and artifacts of those who were part of the Orphan Train Movement. A visit to this museum will amaze and touch your heart like no other.

The library contains the Frank Carlson Room that exhitits memorabilia from Carlson's experiences as a legislator, congressman, governor, and U.S. Senator.

Known as the beacon light of Concordia, the well-known rose window looks over the community from the convent. It is the official Motherhouse and Home for the 260 Sisters of St. Joseph of Concordia. It was built in 1903 and is listed in the National Register of Historic Sites

Listed on the National Register of Historic Places. Originally build as a bank, until recently it housed the offices of the Harris's playground equipment company. It has recently been purchased by Dr. Wentz who is in the process of preserving this beautiful building.

Things to do Museums near Concordia, KS

At the present time the Delphos Museum is in the early stage of development. The present building located on the southwest ...