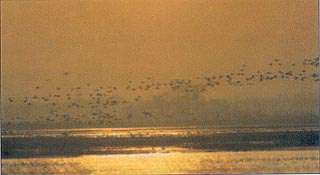 There is Flat Rock Creek, where the first Jesuits stepped out of their covered wagon, after a long trip from St. Louis, just over 150 years ago. Now, all prime fishing places, you may look up at the winter skies and even spot a Bald Eagle.

This man-made 3,246 acre marsh, owned and managed by the Kansas Department of Wildlife and Parks is home to many species. During the spring and fall, the sheer number of migrant birds is most impressive, sometimes reaching 100,000. It shows the Wildlife Area is fulfilling its first purpose: to be a resting and feeding place for migratory waterfowl.

Large stands of timber grow along the five miles of river that border the area, interspersed with many varieties of native grasses, woody vegetation, croplands, permanent wetlands and savannah. The cropland that is still under cultivation is being shared with deer, dove, rabbit, quail, and turkey.

Except for about an 800-acre refuge pool which, during the waterfowl season, is completely off-limits to anyone, most of the wildlife area is open for hunting.
The area also supports a seven-acre fishing pond which is stocked annually with channel catfish, fed by an automatic fish feeder to enhance fish growth. Fishing is allowed from March 1 until 2 weeks before the waterfowl season.

Located on the broad, flat flood plain below the junction of Flat Rock Creek and the Neosho River, the wildlife area is a man-made marsh developed by the Department in 1960. The area covers 3,246 acres. The five largest pools on the area represent 1,675 acres of the 1,787 of intensively managed wetlands. There are sixteen independently managed wetlands throughout the area. The area was primarily designed, and is managed to furnish a resting and feeding place for migratory waterfowl.

Three of the sixteen pools are managed in a moist soil environment through a water level manipulation plan. Four green tree marshes ranging in size from five to fifteen acres offer a different type of hunting opportunity for the sportsman using the area. Area personnel plant an average of 400 acres of corn, milo, buckwheat or millet in the hunting pools. The grain is left in the field and inundated in the fall.

The 800-acre refuge pool is closed to all hunting, foot and vehicle traffic during the waterfowl season. The water level of this pool fluctuates naturally throughout the seasons and provides good aquatic habitat for waterfowl. Fishing is allowed from March 31 until August 31. Good fishing can be found at times in the Neosho River, Flat Rock Creek and Brogan Creek, existing in part on the wildlife area.

Things to do Wildlife Areas near St. Paul, KS