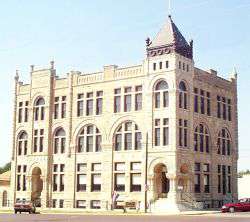 The four-story, 18,700 sq. ft. stone building at the intersection of Main Street and Pennsylvania Avenue, in Ness City, Kansas, was called, upon its completion in 1890, "The finest and most imposing structure west of Topeka." In February, 1972, the building was placed on the National Register of Historic Landmarks.

"Skyscraper of the Plains"

Built to house the Ness County Bank, founded by N.C. Merrill in 1885, it was designed by the architectural firm of Holland & Hopkins of Topeka, Kansas.

Instead of sand, crushed and ground limestone were used as an aggregate for the mortar to insure an exact match with adjoining stone. The window fenestration is generally grouped in threes with second
floor windows enclosed in enormous semi-curricular arches which rise from the first floor line and provide a striking accent to the facade. The pyramid roof structure is flanked by four cut-stone spires. Tower stonework shows the fine craftsmanship of the 1880s.

Hand carved stone arches, thirteen foot ceilings, brass fixtures show but a part of the grandeur of this

structure that was built from Kansas limestone, constructed by Kansas workmen, and designed by Kansas people. An original oil painting, finished in 22-karat gold, adorns the vault door in the Great Room and further enhances the beauty of the interior.

In October, 1889, the cornice roof was installed by Eaton and Cramer. There are 30 rooms in the bank building.

The building has an elevator shaft, unique for its time.Four large walk-in vaults with original burglar alarms remained in working order throughout the years.

Throughout the building the ceilings are 13 feet high. Brass door knobs and fixtures, of a sunflower design, give some indication of the expensive hardware used.

The tenant for that time was an oil company. The post office then became the next tenant and leased the floor for the next ten years.

In 1983 the steeple was repaired and painted and all 110 high arched, hand-carved windows were re-painted.

The Foundation enlisted the help of both engineering and architectural firms to determine the necessary steps to prevent further deterioration and to structurally stabilize the building. Following their recommendations: a new roofwas installed; exterior stone was re-pointed; gutters and downspouts replaced; windows re-glazed; unwanted material removed; and building and grounds were cleaned.

In 1988, the west portion of the main floor was remodeled to house the Ness City Chamber of Commerce office.

In 1989, the Ness City Chamber of Commerce donated a "Gift of Lights" to the building. This imposing structure, outlined in lights during the Christmas season, is an inspirational vision worth the traveling just to experience.

Renovation of the Great Room in the east portion of the main floor was completed in 1990. The Great Room is used as a common hall and exhibit area. It lends itself well to community meetings and programs. A variety of events are hosted there.

An adjoining room was converted into a modern, efficient kitchen in 1991, completing renovation of the main floor.

In 1994, the lower level was transformed into a "Kansas" store - Prairie Mercantile. Foods, books, ironworks, pictures, wheat weavings, post rock carvings, quilts, etc., etc., made in and indicative of Kansas, are in abundance. "Manned" by volunteers, all profits go toward the remodeling of the building.

This memorial honors Ness County Veterans, with a special remembrance to those who made the ultimate sacrifice when answering their country'

The Ness County Country Club is the first golf course in the United States to be equipped with OmniSport artificial greens. The nine-hole course is open to the public for a $5.00 green fee.

We currently do not have any events for Ness City, Kansas in our database. If you know of events taking place, please add the event
.

Things to do Historic Buildings near Ness City, KS

The old "Opera House" building was built in 1881. The second level of the building was used as a theater for commercial plays...