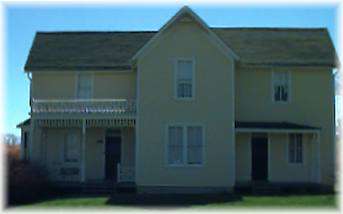 William J. Nincehelser moved to Jefferson County from Ohio about 1880, married Minnie Wendorff, and
moved into this house in Oskaloosa. Mr. Nincehelser had a livery stable on the square and operated a
hack service to take passengers between the two train depots located about a mile outside town. He was
also a coal dealer. The Nincehelsers had four daughters, all of whom attended Oskaloosa Public Schools,
graduated from Emporia State University and became school teachers in Jefferson County. Only one of
the girls married. The others lived their entire lives in this house. William died in 1939 and Minnie died in


The house and most ofits contents were inherited by the JeffersonCounty HistoricalSociety from the estate of Nell Nincehelser, a life-long resident of Jefferson County. Several gifts were also received from Maud Nincehelser Thompson before her death in 1984. Many of the watercolor paintings displayed in the house were done by the Nincehelser daughters. Their art teacher was Alice Worswick of Oskaloosa, who also taught John Steuart Curry.

The house was moved to Old Jefferson Town in 1980 from its location on the 500 block of Cherokee
Street in Oskaloosa. It was opened to the public in May of 1981. In restoring the house and contents,
period furnishings that came with the house were used, and more modern furnishings were replaced with
donated and purchased pieces representing the years from the early 1900s through World War I. The
curtains and shades throughout the house were replaced, but the lamps, vases, pictures and other
miscellaneous memorabilia came with the house. The ceiling fixtures, door knobs, radiators, etc., are all
original. In the dining room, everything except
the tea cart belonged to the
Nincehelsers. The kitchen has been restored to the turn of the century. The table, chairs, highchair, ironing board, crocks and other utensils displayed came with the house. All of the bedroom furniture (except for one bed) was Mr. and Mrs.Nincehelser's when they set up house in 1885, and it was used by their daughters until their deaths. A blue and white quilt that was made by Mrs. Nincehelser for each daughter rests on the beds.

Things to do Museums near Oskaloosa, KS