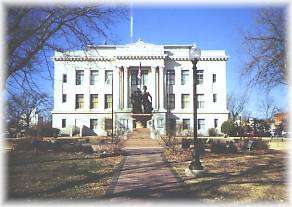 The Courthouse Square is a focal point of downtown Perry and the three-story courthouse in the center of that green oasis looms brightly there, majestically serving as a symbol of justice and dominion. Built in 1916, at a cost of $100,000, it was reputed to be only the second fireproof building existing in Oklahoma, the other being the state capitol in Oklahoma City.

The courthouse houses all county officials plus the Noble county jail in a rooftop super-structure. A passenger elevator was added to the building some 30 years ago for the convenience of the aged, disabled and others needing assistance in climbing the stairs. The elevator was placed in a central rotunda that formerly was open from the first floor to the third. Courtrooms in the building were extensively renovated during the past year. The first Noble county courthouse was a two-story frame structure near the northeast corner of the park.

An heroic bronze statue, titled "Hopes and Dreams," was placed on the east lawn of the park at the time of the Cherokee Strip Centennial year in 1993.

Things to do Historic Courthouses near Perry, OK