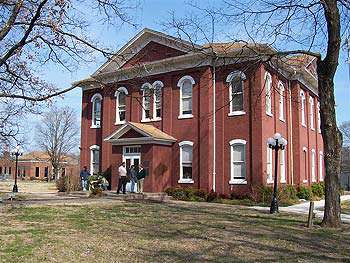 The Cherokee Council first met in 1839 under a large open shed in this area, then later in log buildings. During the Civil War, these were burned down by Cherokee General Stand Watie and his Confederate troops. After the war, the Council made provisions for a new building, and it was finished and occupied by 1870. The building was damaged by fire in 1928, and the interior was completely remodeled. Except for a few features, such as a cupola on the roof, and a vestibule at the front entrance, the exterior remains the same. The structure is listed on the National Register of Historic Places. After statehood in 1907, the building served as Cherokee County Courthouse until 1979, when it was returned to the Cherokee Nation where is houses the court system and election board. A tour of the new capital complex, located south of town (built in May, 1978) will give insight into what the tribe is doing today.


Hours: Tours may be requested at the receptionist's desk, Monday through Friday, 8 am - 5 pm.
Address: 101 South Muskogee Avenue, Downtown
Across the street from the Square stands the Cherokee Supreme Court Building built in 1845. It is the oldest government building in the state of Oklahoma and is in the process of restoration.