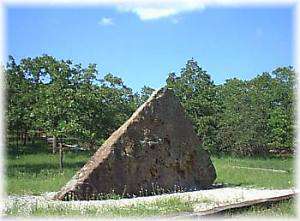 The Healing Rock is not only one of the most outstanding physical formations found in the area, but it also plays an integral part in Osage County's unique history. Healing Rock is a monument to the rich heritage of the people who lived on the land now covered by the beautiful water of Lake Skiatook. According to legend, in the late 19th century, the Indians brought their sick ones here and leaned them up against the rock to be healed.

Archaeologists from the Corps of Engineers and The University of Tulsa examined the formation. Evidence obtained from digs and aerial photographs proved the rock was a natural formation and had been set in near perfect vertical alignment by natural erosion ... ending any speculation that the rock was man-made. The rock stands 12 feet high, has a 17-foot base, and is 14 to 16 inches thick. It is triangular in shape with its jagged apex pointing upward to the heavens.

In the early 1900s, "Teepee Rock," as it was then called, was clearly visible and a wagon trail passed within a few feet. Later, the wagon trail washed out, vegetation grew and obscured the site. The rock was virtually forgotten for many years.

During the 1890s, the Hominy Creek Valley was frequently visited by a Caddo Indian, John Wilson, who sought to establish a new religion with the Osage and Quapaw Indians living there.

"Moonhead" Wilson, as he was called by the Indians, was an interesting character and stories about him are abundant. One such story was that while fasting, Moonhead would go into a trance and "die" for three days, before coming back to life. As the story goes, this feat was once performed at the original site of the Healing Rock. Another story was that Moonhead lay injured near the rock and was brought back to health by an opossum which cleaned his wounds and brought him food.

Similar happenings brought attention to the new religion. With the support of the Quapaw leader, Tallchief, the religion, now know as the Native American Church, was accepted and still survives today. Stories about Moonhead may have been the beginning of the Healing Rock myth. As late as the 1940s, a small group of Indians was seen carrying someone on a stretcher to the Healing Rock. He is still revered by members of the Native American Church. When the plans for Skiatook Lake were finalized, it became clear the rock would be covered by water. Descendents of Tallchief, led by Skiatook resident, Bill Kugee Supernaw, contacted the Corps of Engineers to ask that the rock be saved. The Skiatook Chamber of Commerce and The Skiatook Museum Board campaigned to get the rock moved above the planned lake waters.


Come visit us in Skiatook, Oklahoma

Things to do Ethnic Heritage near Skiatook, OK