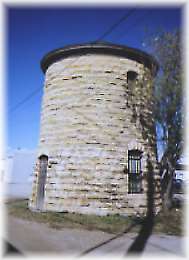 A unique stone building in Wilson, Kansas, is the round jail built around 1911. Originally it was used for a water tower of the city, with the lower part serving as the jail. The 18 foot diameter tower had an area down in the ground floor that was big enough for the city Constable to house his prisoners until the train or wagon came to take them to the county seat. In 1956 the bars were installed on the windows. The pump was in the tower part; it pumped water most of the time not only for human consumption, but also for laundry, gardens, and to water down the dirt roads, and for emergency fires.

The Old City Jail can be viewed year round in the alley between Avenue E and Avenue F in downtown Wilson.

Come visit us in Wilson, Kansas

Things to do Pioneer Life near Wilson, KS