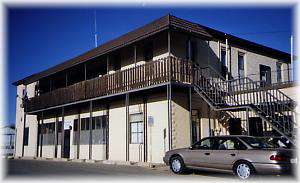 The Commercial Hotel built in 1883 and run by Mrs. W.P. Loucks, had a good trade. Mrs. Loucks, the genial hostess, was the pioneer hotel keeper of Lakin. She came here in 1879 when Lakin was a way station on the Santa Fe and opened an eating house for the railroad employees.

"She has gained a wide reputation for running one of the best hotels in Southwest Kansas. The tables are always supplied with the best foods in season and we can conscientiously recommend the Commercial to the traveling public." (Advocate, 1887)

In 1948 it was still used as a hotel named the Dowd Hotel, and today it is the "Pioneer Home," a multiple family living establishment.

We currently do not have any events for Lakin, Kansas in our database. If you know of events taking place, please add the event
.