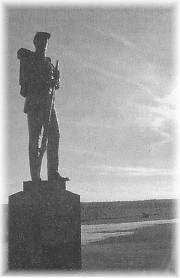 He has stood watch since 1861, on top of the quiet hill overlooking the cornfields and pasture land. Under his committed stance, his motto is inscribed, "In memory of the comrades." And in memory of the comrades he has held his gun, remembering the 24 Civil War and Spanish/American War veterans buried in the smallest cemetery dedicated to veterans in the United States - which happens to be the Lushton Cemetery.

Other veterans and family members are buried in the tiny cemetery, so secluded from the rest of the world - but there's something about the Old Soldier's Monument, erected by the C.W. Hayes Post No. 306, that reminds those today that many people homesteaded the surrounding area of York so many years ago, after their duties were fulfilled in war.

The area became filled with honorably discharged soldiers who were entitled to a homestead of 160 acres. Dozens of men and their families came to settle this area - hence, creating an entire community full of veterans. It was only natural that the cemetery be of the military nature.

The cemetery is still incorporated, regardless of the fact it may be one of the oldest in the county. Many of the cemeteries in York County have monuments to veterans of the Civil War - Greenwood Cemetery on the northwest corner of York has many graves of Civil War veterans and statues accompanying them.

Full maps and descriptions of the cemeteries in the county, including those that are unincorporated, may be found at the Kilgore Memorial Library in York.


Come visit us in Lushton, Nebraska

We currently do not have any events for Lushton, Nebraska in our database. If you know of events taking place, please add the event
.

Things to do Monuments near Lushton, NE