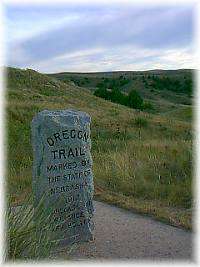 From this summit you can look to the south and see the route of the trail as it made its way along the most gentle rises of the area, and then came to the only possible point of decline, a very steep hill in which deep ruts still remain from the braking of the wagons as they treacherously made their way down the hill.

An open-air interpretive center has been set up at Windless Hill to inform visitors of the challenges facing those pioneers pursuing their dreams towards the west.