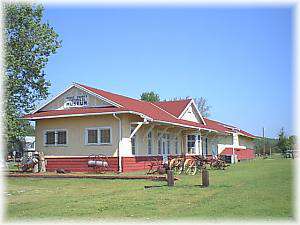 One of the three museums in and around Pawhuska, the Osage County Historical Museum is housed in the historic Santa Fe Depot built in 1922. The museum features exhibits on Indian, pioneer, oil heritage, Boy Scouts and western heritage. Most notably, memorabilia and the history of the first U.S. Boy Scout troop founded in Pawhuska are on exhibit.

Other points of interest located on the museum grounds include two rail cars actually used by the Santa Fe Railroad between Kansas and Pawhuska, two gazebos ( one 1890), and a restored one room school house (Edith Layton School House). Admission: Admission to the museum is free.
Hours: Monday through Friday 9am - 5pm
Saturday and Sunday, 12pm - 5pm
Address: 700 North Lynn Avenue ( One block north of the only stop light on Main Street - US Hiway 60)
Phone: 918-287-9119
Our Email: ochm@husky-net.net
Our Website:www.osagecohistoricalmuseum.com

Tulsa Port of Catoosa and Museum

The Tulsa Port of Catoosa is the furthest inland, ice-free international seaport in America. This port serves as the head of ...