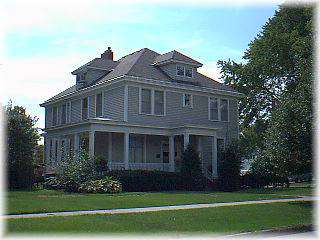 
The Oscar Roeser House was built in 1908 by Henry H. Falldorf following the plans of architect Thomas Rogers Kimball. It is a unique example of German-American architecture executed in the Neo-Classical Revival style. Roeser was a prominent Grand Island businessman and civic leader.