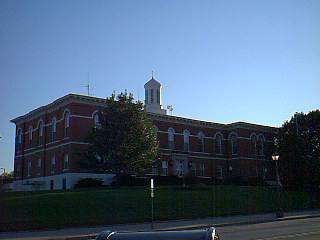 This two-story, Georgian brick structure is the oldest public building in
the state of Nebraska still in use. The building was completed in 1865
when Otoe County was formed and Nebraska City named the county
seat. Inside, several photos and displays portray the building's history.


A contract for the new county courthouse was signed in August 1864. A.G. Basset was the architect and W.R. Craig and F.W. Wood were hired as builders. The original two-story brick structure was completed in 1865 with additions being made about 1882 and 1936. Listed on the National Register of Historic Places, the Otoe County Courthouse is the oldest public building in Nebraska still in use.

Things to do Historic Courthouses near Nebraska City, NE