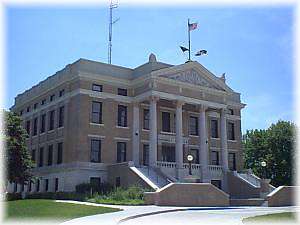 With its location near the Missouri River, an important early transportation link, Pawnee was among the first counties in the state, having been organized in 1856. After two elections in 1856, Pawnee City, which at the time was an area identified only by its township and range legal description, was selected as the county seat. The first courthouse was not built until 1869. By the turn of the century, county residents were prepared to replace the aging and poorly constructed stone building with a more substantial structure. In 1910 voters approved a bond issue to finance a new courthouse.


The Classical Revival-style building, listed on the National Register of Historic Places, was completed in 1911, and is one of ten courthouses designed by W.F. Gernandt. It was renovated in 1999, landscaped, and made handicap assessable.

Quietly nestled in the southeast corner of Pawnee County, Iron Horse Trail Lake is an 85-acre lake situated within the 360-acre recreation area named for the historic railroad trail which winds through the park's wilderness. The dam was completed in 1983

The Pawnee City United States Post Office is a one-story, brick Colonial Revival-style building constructed in 1940-41. While the building retains a high degree of integrity, its historical significance derives from the mural painted on an interior wall. "The Auction"

Things to do Historic Courthouses near Pawnee City, NE