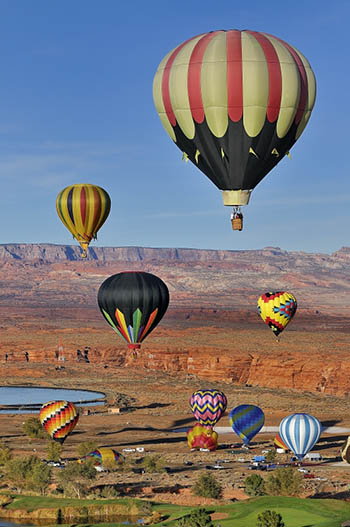 Balloon Lift-off every morning with a street fair and balloon glow on Lake Powell Blvd on Saturday. During the first weekend of November imagine 50 colorful balloons ascending into the clear Arizona sky against a backdrop of the azure blue of Lake Powell contrasted with the red of the Navajo sandstone and the ever-changing hues of the Vermillion Cliffs. The entire event is a visual so spectacular that it becomes truly awe-inspiring. There is something mystical and magical about watching hot air balloons peacefully rise into the sky and float above you.

It was 1869. Ten men in four boats were about to embark on a journey that would cover almost 1,000

Things to do near Page, AZ