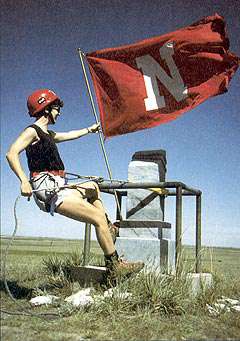 Panorama Point has become quite a popular attraction. On a clear day you can see the Rocky Mountains to the southwest and enjoy the prairie peacefulness of the great Nebraska Plains. A guest registration book is kept at the marker and visitors are asked to sign in.

The chamber of commerce office in Kimball will supply you with a map with clear directions to Panorama Point, and also to the three-state corner marker located nearby. Those who visit will have proof with a certificate issued by the Kimball-Banner County Chamber of Commerce.

Art Henrickson and Claude Alden discovered the highest point in 1951. A marker was installed by the Kimball-Banner Chamber of Commerce in 1971. It was later verified by the federal government and recognized by the state and mapping companies.


Phone: 308-235-3782
Directions to Panorama Point 1. Leave Interstate 80 at the Bushnell Interchange 12 miles west of Kimball. 2. Go south on Road 17 for 10 miles, then west 4.2 miles on Road 8. 3. At Road 9 turn south for 1 mile to Road 6. There is an old school house on the west side of this road. 4. Turn west again on Road 6 for two miles to Road 5. 5. This road will go past the home of Henry Constable on whose land the highest point is located. 6. 2 miles south on Road 5 is the entrance to Panorama Point. 7. Follow this trail road 1 mile west to another cattle guard gate and follow the trail road which turns northwesterly for about 3/8 mile to Panorama Point.

Things to do Natural Attractions near Kimball, NE

These unusual rock formations were two of the first "road signs" met by westward travelers....