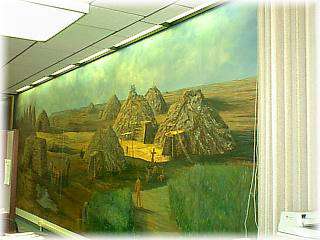 This scene shows the Pawnee Indian Village which was located one mile south of Genoa, Nebraska from 1858 to 1878, with their great Chief Petalesharo in the foreground. It is a picture of a large mural, 9' x 38', covering the east wall at the Genoa National Bank, painted by the well-known artist, Bill Hammon, and based on an actual photograph taken of the Village in 1870. It was the last home in Nebraska of this famous Indian Tribe, numbering about 3,000, before they were forced to move to Indian Territory in Oklahoma in the late 1870s.

People will be interested in being able to see how this village actually looked, and how the Pawnee lived, worked, and played over 130 years ago on the very land we now occupy and farm. Accompanying the mural is a pamphlet written by the artist describing the symbolism he used in order to combine the diverse aspects of Pawnee life which included games, religion, wars, culture, architecture and customs, history and legend, method of dress, prized possessions, and animals. They cultivated corn and pumpkins, they prepared jerked buffalo meat, and were excellent weavers and potters. The earth lodges used by the Pawnee are shown in the variety of shapes and sizes where the entrance usually faced Easterly.

The Pawnee were imaginative and their ceremonies, myths, and folklore are rich in symbolism and imagination. It is the artist's wish that this mural does justice to the people and their creativeness.

Things to do Arts near Genoa, NE