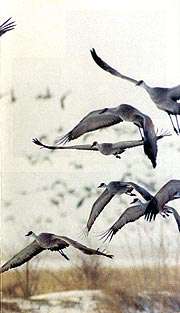 March is the peak month for viewing waterfowl at all of the wildlife preserves. At the Funk Lagoon you may see more than 500,000 ducks and geese per day, and over 20 species of various waterfowl. Shorebirds are found in Sacramento and sandbars on the Platte river. Flooded grain fields are excellent places for spotting buff-breasted sandpipers. Plum thickets and weed patches near wetlands are good places to spot warblers and sparrows.

Enjoy a front row seat for the annual Bald Eagle migration at the Central Nebraska Public Power District J-2 Plant north of Bertrand from Mid-December to mid-March. Catch a glimpse of Swainson's Hawk perching on a stump at the Funk Lagoon.

Coyote and fox abound in the cornfields and pastures of south central Nebraska and can be spotted at the Funk Lagoon.

Sandhill cranes stop off to feed in the cornfields by the Platte River, early March through mid-April, on their way to Canada and thrill viewers with their wonderful mating dance. Pheasant, quail, dove, wild turkey, and rabbit can be found at all of the game preserves and almost anywhere else you travel in the county. White tailed deer are plentiful in Phelps County along rivers and streams, in the wildlife preserves, and sometimes even in town! Come visit us in Holdrege, Nebraska

With the building of the city auditorium in 1916

Greeting visitors to Holdrege is the beautiful 12' bronze sculpture, "Promise of the Prairie", by native artist, George Lundeen. It is a promise for today and tomorrow; The promise that living in Phelps County is a good life with room to grow and laugh and love.

Things to do Wildlife Refuges near Holdrege, NE