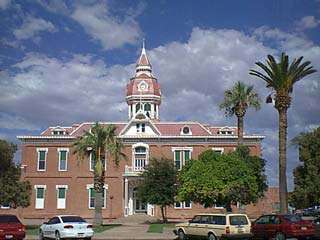 Built in 1891, the second Pinal County Courthouse is the oldest public building in daily use in Arizona. Listed on the National Register of Historic Places, it is an excellent example of American-Victorian architecture with metal columns, lintels, and cornices that reflected the County Supervisors' commitment to continued growth and prosperity in Pinal County.

The rounded part of the building at the rear served as the County Jail and Sheriff's office. The courtroom was on the second floor directly above the jail. It was here where Pearl Hart, Arizona's only woman bandit, was confined. She was tried here for stage robbery and was sentenced to serve five years in the Territorial Prison at Yuma. In 1899, Miss Hart's accomplice in the robbery, Joe Boot, got 30 years for the same crime.

A trial was being conducted in the old courtroom when pounding and hammering started below. It grew so loud, the judge called a recess and sent the bailiff to order a halt until the trial was concluded. The bailiff returned laughing and explained that the prisoners in jail below had been pounding a hole through the wall directly below the judge's bench. Fortunately, their work was interrupted before they could escape.

Florence contractors, A.J. Doran and T.A. Adams built the courthouse for a cost of $29,000. A shortage of funds resulted in painted metal clock faces in the distinctive cupola. Thus, "time stands still" at 11:44.