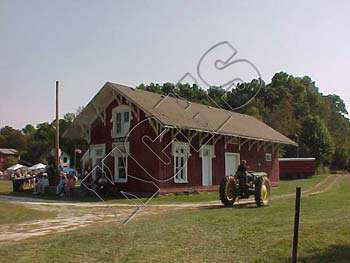 The Plano Depot was built in Chicago, Illinois and hauled to Plano on flatcars in the 1850's. It was built by the C.B. & Q Railroad (Chicago, Burlington & Quincy Railroad) in the Gothic Style architecture. The depot was used until 1914 or 1915, when the new depot was built. At that time, its location was moved 1/2 block east and it was used as a freight house and various businesses. It was moved to Lyon Farm at the Kendall County Historical Society museum complex in 1978.

Adjacent to the depot, the Caboose was built in the Aurora, Illinois C.B. & Q (Chicago, Burlington & Quincy Railroad) shops in 1918. It was used on the Fox River Line for 56 years and moved to Lyon Farm in 1974.

The Oswego-Fox House was built in the 1870's by the Fox family, ancestors of the Cutter family from Oswego, Illinois. The house was located 1/2 mile south of Oswego on Route 71. It was moved to Lyon Farm at the Kendall County Historical Society museum complex in 1975

Things to do Railroad History near Yorkville, IL