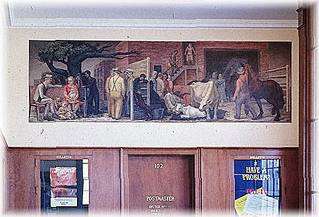 The Pawnee City United States Post Office is a one-story, brick Colonial Revival-style building constructed in 1940-41. While the building retains a high degree of integrity, its historical significance derives from the mural painted on an interior wall. "The Auction" by Kenneth Evett was installed in 1942.


Through New Deal programs such as the Public Works of Art Project and the WPA Federal Art Project, thousands of artists were employed. In 1934 the Section Of Painting and Sculpture (renamed the Section of Fine Arts in 1938) was organized under the auspices of the Treasury Department to provide murals and sculpture for the many federal buildings constructed during the New Deal era.

Between 1938 and 1942 the Treasury Department's Section of Fine Arts (generally known as "the Section") commission twelve murals for twelve newly constructed post offices in Nebraska. Pawnee City, along with the other eleven post office murals in Nebraska represent the Section's goal of making art accessible to the general population by reserving one percent of new building construction budgets for art.

The Pawnee City United States Post Office is a one-story, brick Colonial Revival-style building constructed in 1940-41. While the building retains a high degree of integrity, its historical significance derives from the mural painted on an interior wall. "The Auction"

Quietly nestled in the southeast corner of Pawnee County, Iron Horse Trail Lake is an 85-acre lake situated within the 360-acre recreation area named for the historic railroad trail which winds through the park's wilderness. The dam was completed in 1983

Among the four houses located in the National Historic Register District in Pawnee City, the large frame dwelling is a good example of the Queen Anne style. Known as the "Hempstead Mansion," the house was built in 1887-88 by E. F. Hempstead, who came to Nebraska from Illinois in 1886

We currently do not have any events for Pawnee City, Nebraska in our database. If you know of events taking place, please add the event
.

Things to do Arts near Pawnee City, NE