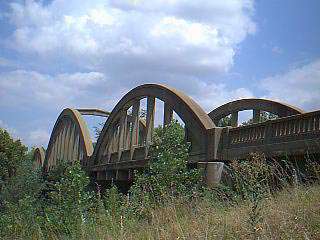 James B. Marsh patented design used rainbow arches that would expand and contract along with the bridge floor under varying conditions of moisture and temperature. The Pottawatomie Creek Bridge, built in 1932, reaches 120 feet into the air and contains 1,500 cubic yards of concrete and 313,000 pounds of steel. This is one of only eight Marsh Arch triple span bridges remaining in Kansas.

Things to do Historic Bridges near Osawatomie, KS