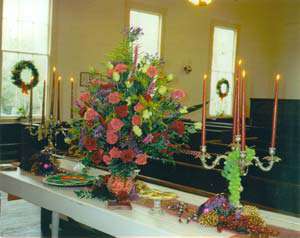 The original Providence Baptist Church was built approximately two and a half miles northwest of Chappell Hill. This building was destroyed by a violent storm in 1866. Part of the congregation continued to meet in the Presbyterian Church in Chappell Hill until the present building was completed in 1873.

Visitors can view an interior baptistry under the pulpit and seperate dressing rooms for men and women.

The Church became Society property in 1996, has been restored and is included in the National Register's Historical District of Chappell Hill.

The historic Chappell Hill United Methodist Church is located adjacent to the Museum. This charming building was erected in 1901 to replace the original structure built in 1853 that was destroyed by the 1900

The Chappell Hill Historical Museum, a must-see for early Texas history buffs, occupies a former public school building constructed in 1927 and built on the site of the Chappell Hill Female College. Exhibits of photos, documents and artifacts give a glimpse of the town from its beginnings in 1847

The original Providence Baptist Church was built approximately two and a half miles northwest of Chappell Hill. This building was destroyed by a violent storm in 1866

Located on Old Chappell Hill Road on the Chappell Hill's west side, this scenic cemetery contains grave sites of heroes from the Texas Republic and Confederacy, children of William B. Travis, Jacob Haller (town founder) and other early Texas pioneers.

To Chappell Hill calendar of events

Things to do Historic Churches near Chappell Hill, TX

This congregation began as part of the early Methodist missionary effort in Texas. A camp meeting was held in Milam County in...