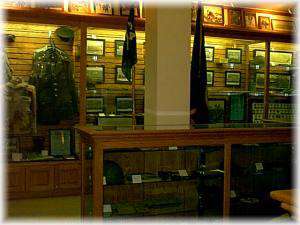 The Museum houses a wide variety of artifacts in beautiful oak cases that have been built to match the courthouse's original 1924-25 oak woodwork. There is a large collection of exhibits and displays of war memorabilia, including photographs, uniforms, and equipment from WW I, WW II, the Korean War, the Vietnam War, and the Gulf War, and Company B, 134th Infantry, Nebraska Army National Guard.